How to Restore Body Composition After Pregnancy

Home » How to Restore Body Composition After Pregnancy

“This article originally appeared on InBody USA and is reposted here with permission.”

Editor’s Note: This post was updated on September 18, 2018, for accuracy and comprehensiveness. It was originally published on March 2, 2017,

For most women, the first few months following childbirth means going through an emotional rollercoaster — it’s humbling, scary, exhausting, blissful, surreal, and relieving all at once.

If you’re like most women, your new bundle of joy took a toll on your body. A post-baby pooch looks back at you in the mirror. The effects from breastfeeding aren’t doing anything to encourage you to get back to your favorite outdoor activities. Those pre-baby jeans in your dresser? A distant memory.

Even if you were in good shape before pregnancy, physical changes to your body like additional weight gain and the appearance of a postpartum belly (diastasis recti) are inevitable following childbirth.

There is good news for those who do become pregnant: you can regain your body composition. The key is knowing what to expect in terms of physical changes to your body, and what you can do to bounce back after childbirth.

Let’s figure this out, shall we?

Body Composition Changes During and After Pregnancy

The body composition changes you experience during pregnancy and childbirth is your body’s way of nurturing your little one for nine months and preparing your body for labor.

During pregnancy and following childbirth, the two big (unwanted changes) in body composition are fat mass gain and diastasis recti – don’t worry if you don’t know what that second term means, we’ll get into it in a minute.

In addition to the baby’s weight, total weight gain during pregnancy is the combined weight of your enlarged uterus (womb) and breasts, extra blood, placenta, amniotic fluids, and extra fat stores.

Why the sudden need to store up fat? Because it intuitively knows that you’ll need the extra adipose tissue for the developing the baby and breastfeeding.

But how much? And where? Unfortunately, this is the part where it becomes a bit tricky, with few definitive answers in sight.

Further muddying up any usable insights is the fact that researchers also can’t effectively determine types of changes that happen in a mother’s body composition (her Lean Body Mass, her Fat Free Mass, etc.) due to a variety of factors, not the least of which is the inability to separate the body compositions of the mother and her baby.

However, one of the more reliable predictors of the degree of body fat gain seems to be if it’s the first baby or not  Research has indicated that first-time mothers had higher body fat gain during pregnancy than moms with multiple children. Six months after delivery, it also turned out that the first-time moms retained more of the excess fat they gained than the moms who already went through previous childbirths.

By the time you give birth, you will lose a huge chunk of the weight you gained— the baby, placenta, extra blood, and fluids will go first. For the next six weeks, the uterus will shrink in size and return to its pre-pregnancy weight.

Unfortunately, the fat stored during pregnancy will not automatically disappear postpartum. Your body will likely cling to the extra stores of fat and ready itself for breastfeeding – something that can actually help you lose pregnancy-gained body fat – but more on that in a minute.

One major impact that pregnancy can have on your body is something called abdominal muscle separation, or diastasis recti.This happens when your outermost ab muscles (rectus abdominis) that run from the breastbone to the pubic bone pull apart from the fibrous attachment point (linea alba).

As your pregnancy progresses, your uterus will make room for the growing baby, which in turn causes the abdominal (recti) muscles to stretch and appear flabby.  Fortunately, diastasis recti isn’t linked with complications for the mother or the baby, nor is it a sign of muscle loss.

The degree of diastasis recti may decline following childbirth, but it almost always won’t disappear completely on its own.

In a nutshell, the weak and unsupported abdominal muscles are what’s behind the noticeable postpartum belly, or why you can look like a few months pregnant even after giving birth.

Now that you have a clearer picture of the two unwanted body composition changes following pregnancy — excess fat storage and loose, weak abdominal muscles —let’s take a look at the possible steps to help restore (and even improve on) your pre-baby body composition.

Impact of Breastfeeding and Body Composition

Breastfeeding and weight loss are probably the last things you’d ever link together, but as it turns out, there’s a growing body of research showing that there may be a relationship. One of the most striking comes from Denmark, where an epidemiological study suggested that breastfeeding could eliminate reasonable weight gain (defined as 12 kg, or about 26.5 pounds) in six months of breastfeeding.

Considering that you still need fat to produce milk for your little one, how much weight loss is considered “safe” while breastfeeding?

A weight loss of approximately 0.5 kg, or about a pound, per week (between 4 and 14 weeks after childbirth) in overweight, lactating women who were exclusively breastfeeding was shown to have no negative effect on the growth and development of their newborns.

Your Diet, Nutrition, and Physical Activity During and After Pregnancy

From a nutritional standpoint, a high-glycemic diet during pregnancy is more likely to result in excessive weight gain and overweight babies, while intake of low-glycemic carbs is associated with weight gain that’s within the normal range.

If you’re planning to get pregnant or are pregnant now, pay special attention to the quality of your carb intake.

Health care providers will often advise women to avoid drastic diets for the first four to six weeks after delivery. Besides giving your body time to recover, you also need to establish a consistent milk supply (rapid weight loss might interfere with breastfeeding).

Before going on a diet regimen or exercise program, check with your healthcare provider first to rule out any existing medical conditions.

So which is more effective in weight loss after pregnancy — diet or exercise?

This study revealed that dietary restriction is more effective than physical activity in accomplishing significant weight loss among women who are breastfeeding. However, this should not be an excuse to dismiss exercise altogether.

You can reduce its appearance by focusing on integrative or compound exercises for the core muscles (abdominals, back, and the muscles around the pelvis) rather than isolation exercises. The former has been shown to be more effective in rebuilding the core. For example, opt for side planks with arm raises and mountain climbers over sit-ups and crunches.

In their 2015 guidelines on physical activity for pregnant and post-childbirth women, the American Congress of Obstetricians and Gynecologists (ACOG) recommends the following:

Exercise routines may be resumed gradually after pregnancy as soon as medically safe, depending on the mode of delivery, vaginal or cesarean, and the presence or absence of medical or surgical complications.

Some women are capable of resuming physical activities within days of delivery. In the absence of medical or surgical complications, rapid resumption of these activities has not been found to result in adverse effects. Pelvic floor exercises could be initiated in the immediate postpartum (after delivery) period.

The key takeaway here is to take it slow. You may not be able to immediately jump back into your favorite activities, and that’s okay. Focus on starting a routine of what you can do and soon you will be back to doing what you love to do.

Be Kinder to Yourself

Keep in mind that it took nine months of physical changes for you to put the additional weight on, and it may take another nine months (or even longer since you have to take breastfeeding and caring for the newborn into account) for you to regain your pre-baby body composition.

Forget celebrities who quickly get their pre-baby body back only weeks after childbirth. Take note that they have an army of chefs, fitness trainers, and plastic surgeons behind the dramatic weight loss.

Nevertheless, before embarking on your post-childbirth makeover, you need to know where you’re currently at. This means getting your body composition tested to help you set body composition goals that’s specific for you.

Ultimately, give yourself time. Changing your body composition, after childbirth or any stage of your life, is a lifestyle, not an end destination – and certainly not one that you need to reach by a certain time. By taking steps now that make the most sense for you and making gradual positive changes, you’ll be back to your pre-baby body before you know it.

Kyjean Tomboc is a nurse turned freelance healthcare copywriter and UX researcher.  After experimenting with going paleo and vegetarian, she realized that it all boils down to eating real food. 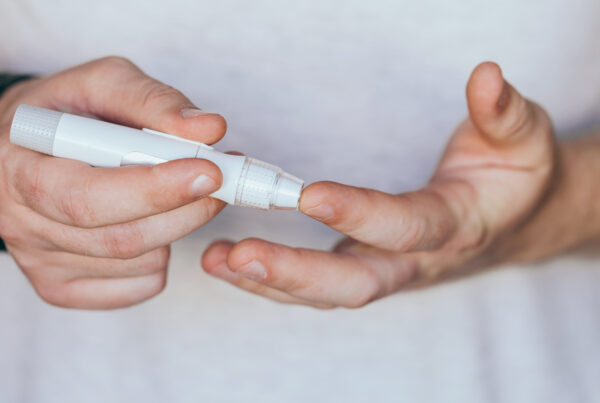 Body Composition and Diabetes Risk: The Connection You Need to Know

High Colesterol: Why It Matters And How Improving Your Body Composition Can Help

What is Nutrigenomics and Can It Improve Body Composition?